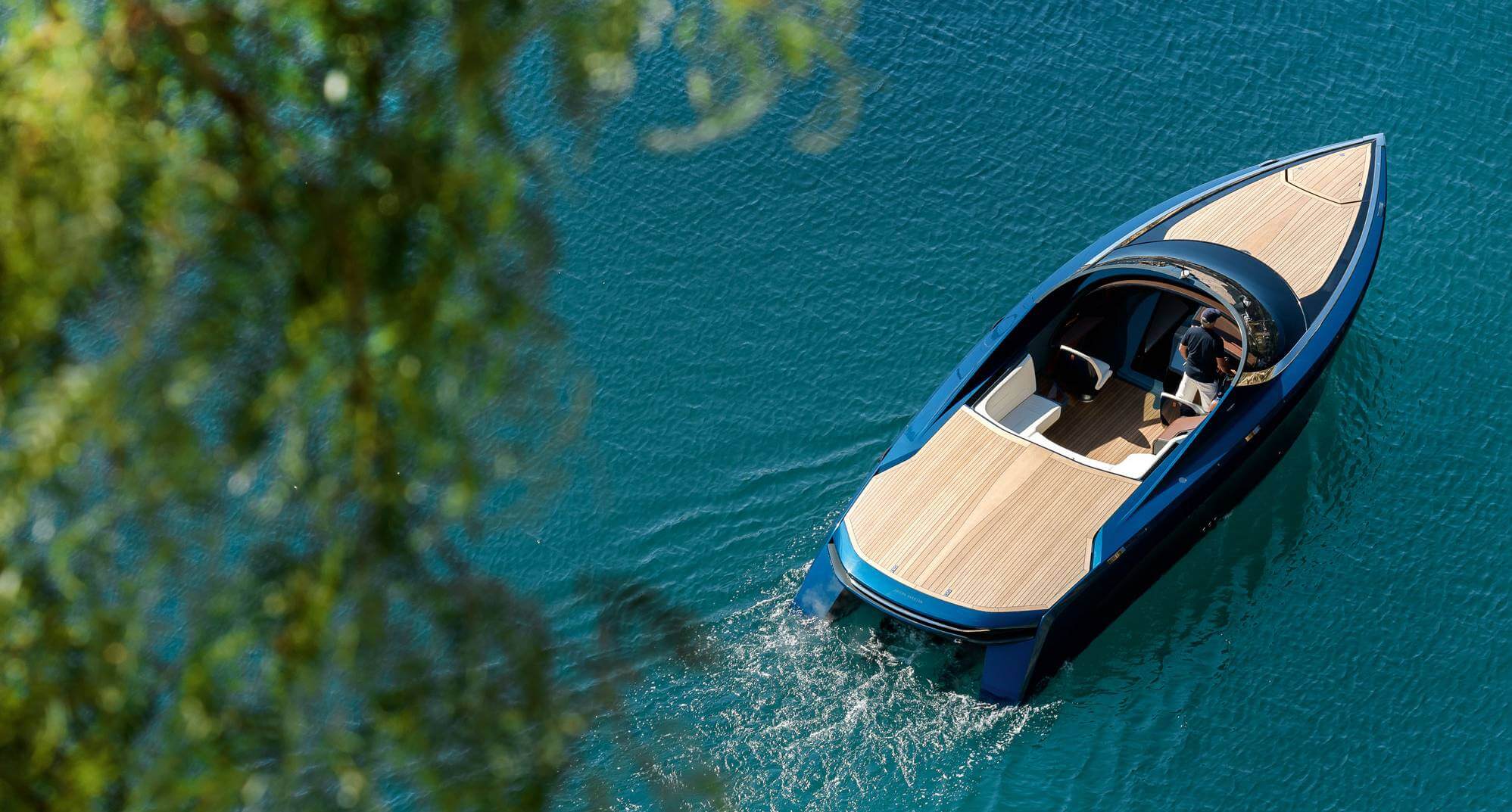 The car manufacturer’s first ever boat is a remarkable achievement, but has the Aston Martin AM37 got what it takes to win over serious boating enthusiasts?

The boat that sits bobbing gently in the harbour attracts plenty of second glances from passing yachtsmen and promenaders. Sleek and low, with flashes of chrome and a hull colour that’s markedly different to its neighbouring vessels, it also has a famous winged badge, nestling behind the steeply raked windscreen.

This is the AM37 Powerboat, the spectacular result of a collaboration between Aston Martin and Quintessence Yachts. It has taken two years to bring this machine to life, during which time Aston Martin’s design team has worked closely with Amsterdam-based Quintessence Yachts and naval architects, Mulder Design. The project has been alive with the cross-pollination of the discipline of car and boat design, bringing two separate spheres of advanced technology and craftsmanship into contact with one another for the very first time.

The sleek, low profile of the AM37 is the result of two years collaboration between Aston Martin’s design team and naval architects Mulder Design. The result is a striking day-cruiser that can be transformed into an overnight berth at the touch of a button

The AM37 was designed to bring Aston Martin’s values to this very niche sector of the yacht market. Intended as a powerful day boat, with overnight capabilities if required, the AM37 is a grand tourer for the waves, a vessel designed to take you away and give you a thrilling ride in the process. “We wanted this to be an excellent boat from the marine perspective, with a sense of masculine power. It’s comparable to an Aston Martin sports car,” says Quintessence Yachts’ CEO Mariella Mengozzi. “It’s a day boat that achieves a unique mix of Gran Turismo performance and luxury,” she explains, setting out the hypothetical demands of an owner seeking something sportier and more informal than a grand, highly crewed yacht. 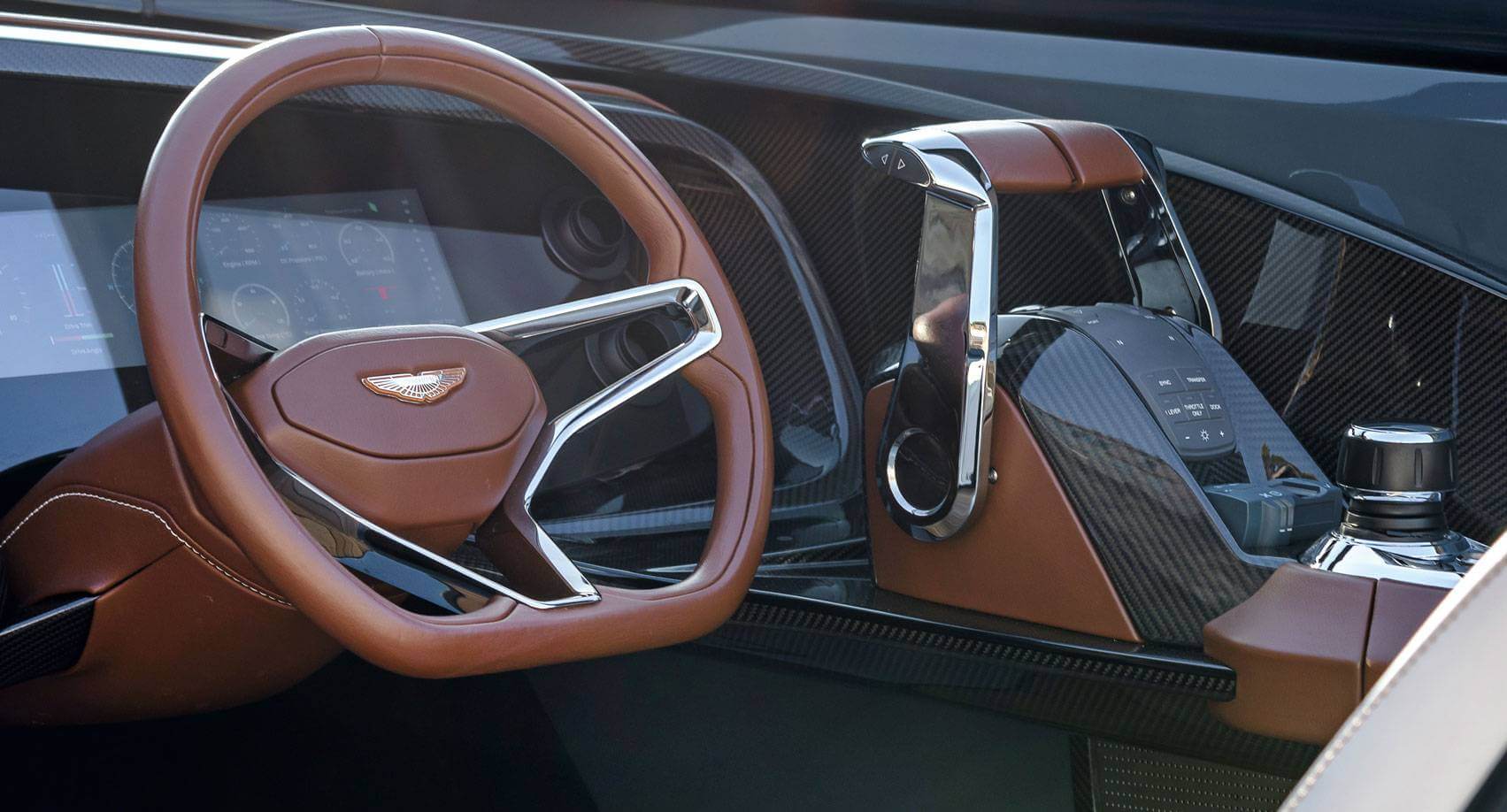 Aston Martin’s DNA is evident in every facet of this 37ft boat. Not a single element is off the shelf, from the meticulously detailed cleats to the saddle leather storage pouches in the cockpit. All the trim and leather design is by Aston Martin, using the same level of skill and crafsmanship as it does for its cars. The AM37 is built at Quintessence’s shipyard in Whiteley near England’s south coast, the heart of its naval heritage and marine industry. Quintessence’s skilled workforce is also the equal of the craftsmen and women building Aston Martins at Gaydon, only here the Class “A” surfaces are the beautifully fitting teak rear deck and the immaculate cabinetry in the bespoke cabin. “We do everything ourselves, from the carpentry and the hull to the assembly and the electronics,” Mengozzi says.

That most critical of all design elements — proportion — is naturally given a different spin in a machine intended to skim the waves, but the classic Aston Martin qualities are in evidence, from the steeply raked windscreen — a huge, custom-moulded piece of glass — to the chrome detailing, discreet wing badge and cocooning cockpit, with its leather-swathed chairs and benches.

Bas Mulder at Mulder Design created the boat in close collaboration with Marek Reichman and his team at Aston Martin. “AM37 is a pure translation of the Aston Martin DNA into an entirely new maritime concept,” says Reichmann. “It was important to us when considering this project to make sure that the boat design was as beautiful and timeless as our cars and the AM37 is a striking boat with fantastic proportion and elegance.”

The hull’s well-proven geometry provides the perfect platform on which to create the sleek shell of the AM37. And you can, of course, specify your boat at Aston Martin’s Dover Street boutique in London, just as you would a car — every facet of the interior is customisable, while the paint colours are specially marinised versions of Aston Martin’s evocative palette.

Beneath the immaculate rear deck lies the AM37’s mechanical heart: twin Mercury Racing 520bhp V8 engines that have been tuned for performance and deliver around 48 knots (roughly 55mph), although adjustments will deliver 50 knots in the AM37S customer boats. “It’s an uncommon speed in this category, but we didn’t want to be too extreme,” Mengozzi admits. “We could have done more, but the objective was to have a Gran Turismo mix of handling, performance and refinement.”

The latter is certainly in evidence on our test run out across Monaco Bay. At the helm is Mark Goodwin, a locally based sailor with decades of experience crewing and captaining all manner of vessels. He expertly guides the very first prototype of the AM37 out from its moorings at Port de Fontvieille, then heads east out into the Mediterranean, skirting the superyachts still moored in the Port of Monaco after the previous week’s yacht show.

Low speed manoeuvrability is superb as the sleek hull noses precisely through the multi-storeyed thicket of small yachts. Goodwin points out that many prospective AM37 owners will relish the simplicity and ease with which the 37ft hull can be positioned, making one-person operation a true possibility. Despite a hefty sea swell, Goodwin opens the throttle and the boat rushes forward. The 16 combined cylinders of the twin 520bhp engines give off a deep, bassy thrum and the boat cuts deftly through the water. As the speed increases, the boat demonstrates absolute stability, the hull scything through the smaller waves, and when expertly guided up and down the larger crests and peaks, riding the throttle to maintain steady, even progress.

A quick tour of the cabin shows this to be the most spacious Aston Martin ever made. A galley kitchen and bathroom adjoin a seating area, with leather benches and exquisite joinery, while the detail design throughout the cockpit, with its leather and carbon captain’s chairs, as well as the wheel itself, demonstrate the extent to which Aston Martin’s designers have shaped every aspect of the boat.

Back on dry land, Mengozzi describes Quintessence’s hi-tech approach: “When we talk about power and beauty, you can immediately recognise it in the AM37, but our soul and passion is also the technological content of the AM37. We use technology to provide a different yachting experience.”

Sleek touches abound. The boat’s sliding deck can be remotely operated from the bespoke iOS app, while the access steps built into the rear bench and the companionway door are also push-button operated. Most spectacular of all is the champagne cooler, a carbon-fibre-swathed cool box located behind the captain’s chair. “We developed all this technology ourselves. The app also allows the owner to communicate with their boat and check the battery and the air-conditioning, and open or close the cover.” There’s also a Bimini hardtop stowed beneath that rear deck, providing sun or weather cover when moored.

Right now, beneath the azure Riviera sky, a cover is the last thing we need. A glass of something chilled, the spectacular Mediterranean coastline and the knowledge that power, beauty and finely crafted practicality are just below decks, make the AM37 a very special way of experiencing the world of Aston Martin and Quintessence. “AM37 is unique in the market,” says Mengozzi. ‘It’s a new way of experiencing life at sea.”

That kind of speed may sound appealing but anybody who’s driven a really fast boat knows that speeds over 50 knots are rarely an enjoyable experience. Exciting, yes, for a brief period, but also loud, scary and deeply uncomfortable in anything other than mirror-flat water.

No, what it aspired to build was a swift, luxurious, elegant craft that captured the true spirit of Aston Martin; a British Grand Tourer that could outshine its glamorous rivals from Riva and Chris-Craft.

That’s a hell of a big shout, especially for a brand new company that’s essentially starting from scratch, but thanks to the remarkable efforts of its own engineers as well as the exceptional level of input from Aston Martin’s design team, the first fruit of its labour is now waiting for me to drive. Watch the video above to see what it’s like…

These are the first photographs of Aston Martin’s hotly anticipated AM37 sportsboat which is already being tipped as the natural choice for James Bond’s next boat. Q will have to find £1,260,720 for the AM37 with two 430 HP engines or £1,621,489 if 007 demands the Am37S Platinum Spec.

Developed by Aston Martin and Quintessence Yachts, it has a top speed of 50 knots and several innovative new features including a retractable cockpit cover and bathing platform. 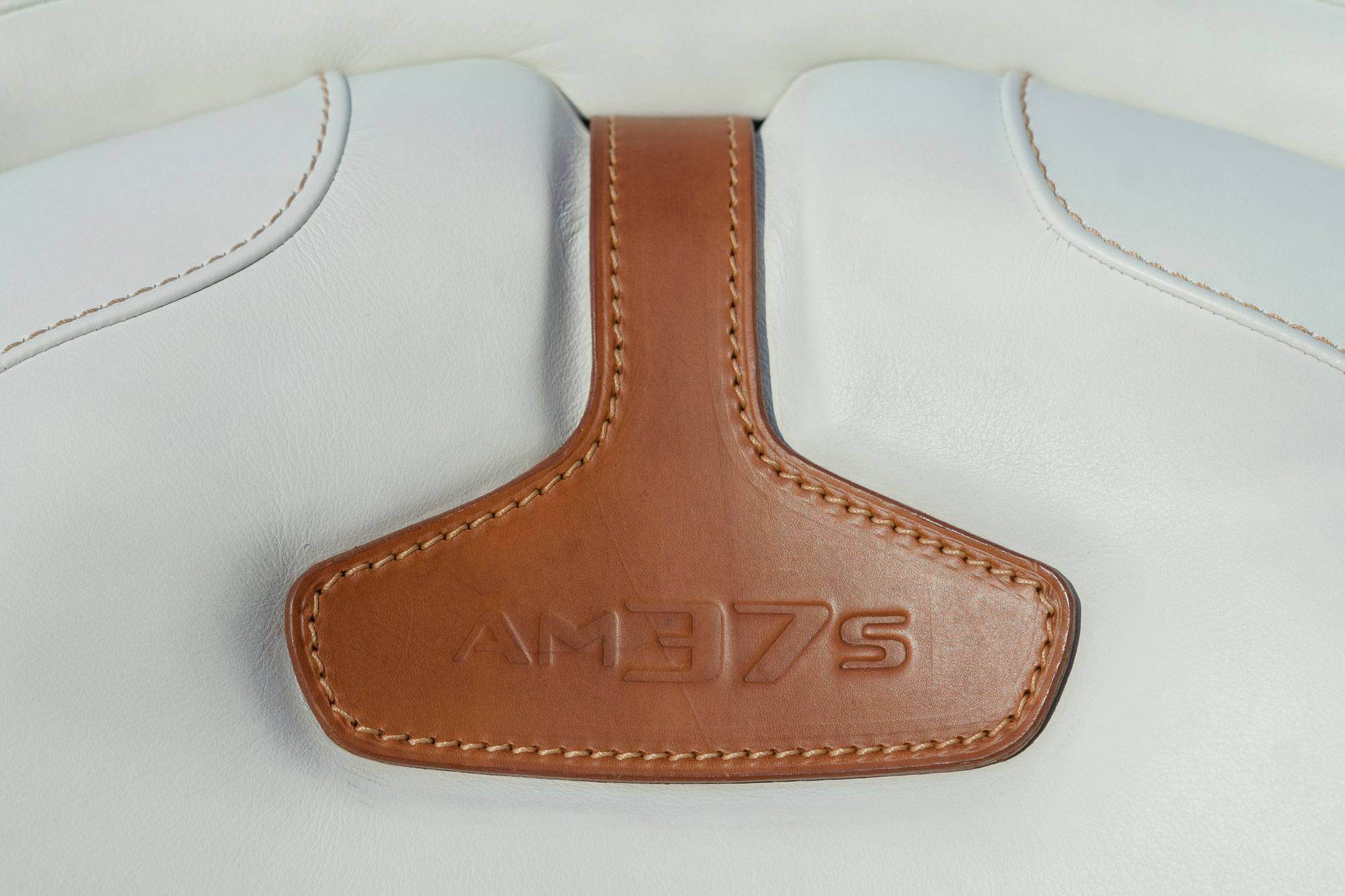 At the touch of a button on the AM37’s key, three lightweight carbon fibre panels slide away under the aft deck to reveal the luxurious cockpit. Another button extends a bathing platform from under the transom while yet another raises the hydraulic carbon fibre bimini top from its stowed position under the engine hatch.

Although designed primarily as a boat, the open plan cuddy cabin can be transformed into an overnight berth with the aid of a convertible dinette table. Mood lighting, air-conditioning, basic galley facilities and a toilet provide all the essentials for a romantic weekend.

The cockpit seats up to eight people and is protected by a wraparound windscreen created from a single piece of extreme double curvature glass.

“AM37 is a pure translation of the Aston Martin DNA into an entirely new maritime concept,” said Aston Martin’s EVP & Chief Creative Officer, Marek Reichman. “The powerboat reflects our values in terms of power, beauty and soul.”