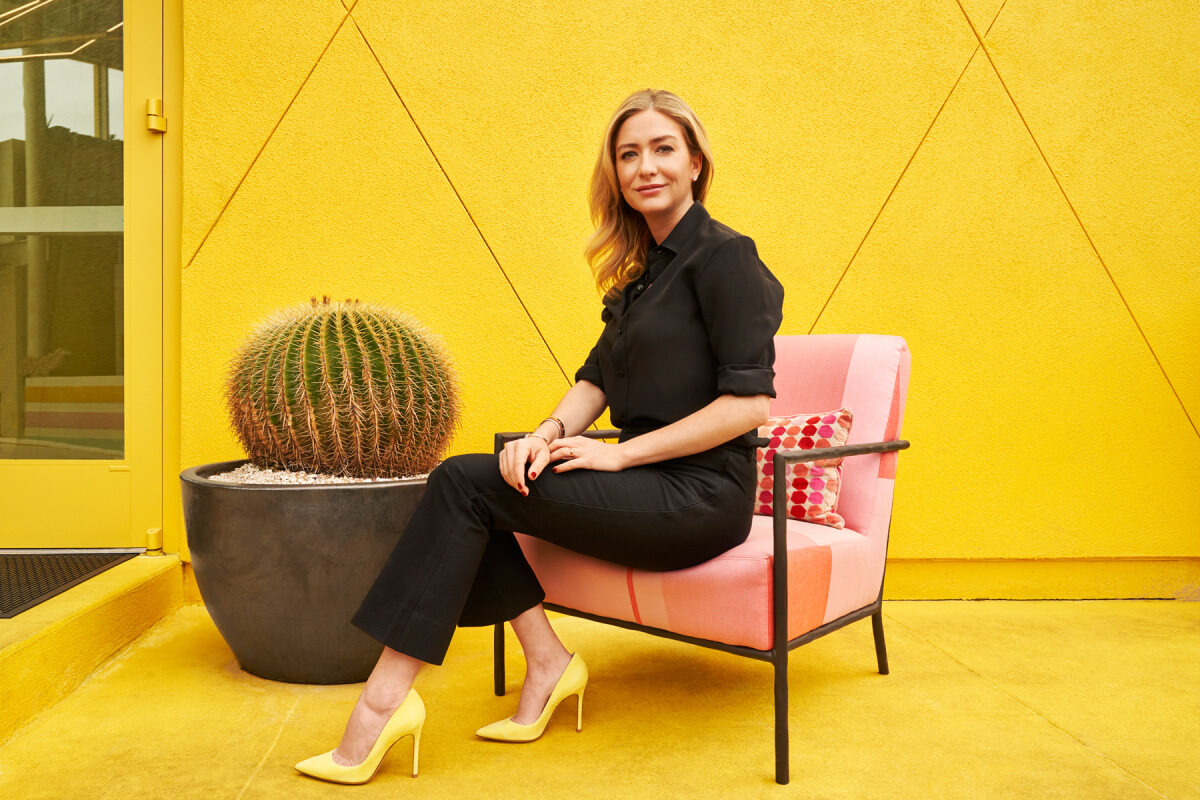 If you’re not familiar with Bumble, it’s a dating app with a unique approach. It puts women in the driving seat by giving them complete control over who can message them. It means no more unsolicited crude messages, harassment or abuse – which has become a hugely contentious issue.

Founder Whitney Wolfe Herd created the groundbreaking dating app in 2014, along with co-founder Andrey Andreev after they departed Tinder. Now, the latest valuation places Bumble at $13bn. Wolfe Herd is a rare standout amongst tech entrepreneurs, she’s a CEO who believes in taking responsibility for what happens on her platform.

When Whitney Wolfe Herd became the world’s youngest female self-made billionaire – actually self-made, of course; forget about Kylie Jenner – she held her one-year-old son as she rang the bell that would symbolically open trading on the Nasdaq. They were surrounded by signature yellow balloons at the Hive headquarters in Austin, Texas, replete with hexagonal beehive decor. Wolfe Herd stood under a huge illuminated sign that read “Make the first move.”

“I think everything looks a little more yellow and cheery on TV,” Wolfe Herd tells us. “I was very sleep-deprived. I haven’t had a higher heart rate for several months!” But all of her hard work was worth it. Bumble floated to public investors with a share price of $43. By the next day, its shares were trading at $76, giving it a market capitalisation in the region of $13 billion. At 31 years old, she became the youngest woman ever to take a company public.

Bumble quickly became a hot commodity among investors. For most people, preconceptions about dating apps depend on when (if ever) they or their peers last used one. If the answer is never, then you probably think of them as the impenetrable, slightly clinical products that have killed off the spontaneous, romantic meet-cute in favour of algorithmic matchmaking. If you last used one more than five years ago, you probably remember a Wild West of inappropriate pictures and filthy come-ons, as well as sporadic messaging and disappearing matches. But if you’re a regular user – and Bumble alone has 42 million of them each month – then you’ll know that dating apps these days are broadly well-engineered, safe, and go out of their way to provide the user with prompts or talking points to spark a conversation with matches.

Far and away, Bumble is one of the least toxic dating apps on offer. Its sine qua non is the fact that women have to initiate contact with their matches first, meaning no unwanted messages, or at least far fewer. The app uses AI technology called a “private detector” to detect lewd pictures and blur them out before recipients see them; profile pictures with guns are banned entirely (for obvious reasons, posing with assault rifles is a more significant trend in the US than in Britain). The whole app has a more serious, safer feel than certain market rivals. The other USP is that once users match on Bumble, the woman only has 24 hours to open a conversation before the match disappears (in same-sex matches, either party can message first).

Where it all started

Like all the major tech CEOs, Wolfe Herd has a subtly teleological origin story that suggests her company was always somewhere deep inside her, latent and waiting to be launched to great success. Wolfe Herd was born to a Jewish father and Catholic mother in Salt Lake City, Utah and grew up amid the state’s pervasive culture of Mormonism. “With all due respect to them,” she explains, “it’s quite assigned as far as gender roles go. Women are expected to get married and have children, even in their late teens or early twenties. Men are expected to provide for the family at a young age.” The young Whitney Wolfe (she changed her name when she married Michael Herd, a Texan oil heir, in 2017) already understood the way men and women interact to be “very assigned,” she recalls. “I had witnessed the girls wait and the boys lead. I didn’t wake up at 15 and have a notebook sketching out Bumble, but I think I was, mentally, absorbing a lot of things that I felt were… call it assigned or unfair.”

Wolfe Herd went to university in Texas and then joined a start-up incubator called Hatch Labs. She knew she wanted to work in tech, she says, after a trip to Southeast Asia in which she saw how reliant travellers and locals were on their phones – “It’s so hard to have any impact or to navigate a place without technology. All you have in this world is what you have access to right in front of your face” – but she didn’t yet know just what problem she wanted to solve.

The answer came in the form of Tinder. Wolfe Herd co-founded the dating app in 2012 and worked on its marketing, until a relationship with cofounder Justin Mateen soured, she left the company acrimoniously, and sued them for sexual harassment and discrimination. Tinder denied the allegations and a reported $1 million settlement was reached. In 2014, she went on to found Bumble with help from Andrey Andreev, the London-based Russian entrepreneur and founder of dating app Badoo. Andreev also invested $10m in Bumble in exchange for a tranche of the business, allowing Wolfe Herd to bypass her seed round of fundraising and, in essence, turbocharge Bumble’s development and growth. Fast forward seven years and Wolfe Herd is the CEO of Bumble and Badoo (Andreev sold his stake in 2019) and her app has initiated more than 1.7bn individual connections.