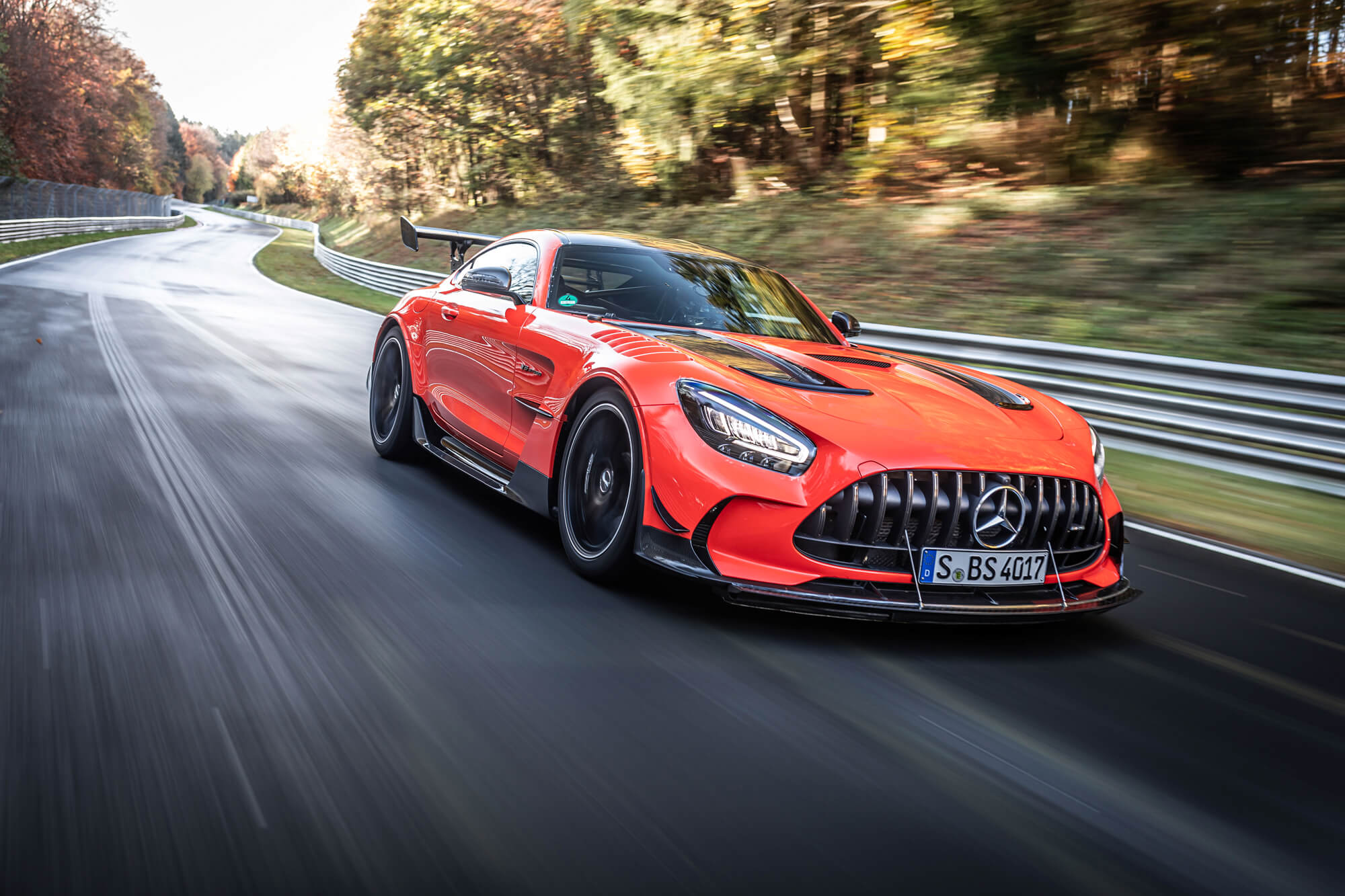 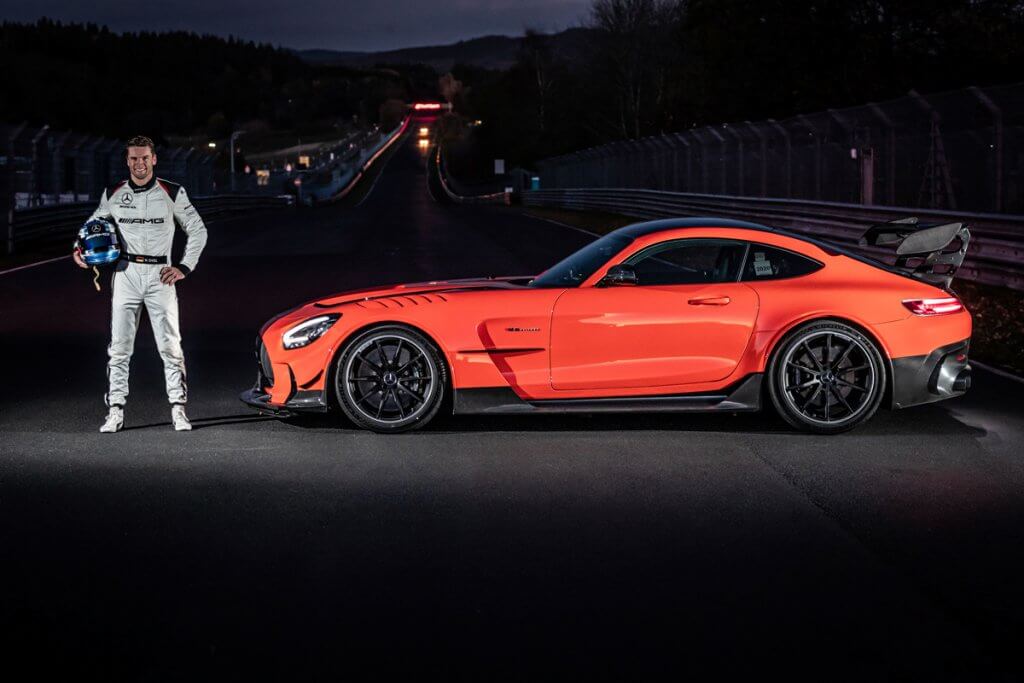 How close the new Mercedes-AMG GT Black Series actually is to motorsport has now been impressively demonstrated by GT3 racer Maro Engel on the Nürburgring. With an official time of 6:43,616 min for the 20.6 kilometre-long track, the new V8 meteor is placed in the top group of the street-legal “sports cars” category and number one among the fully standard, unmodified models. 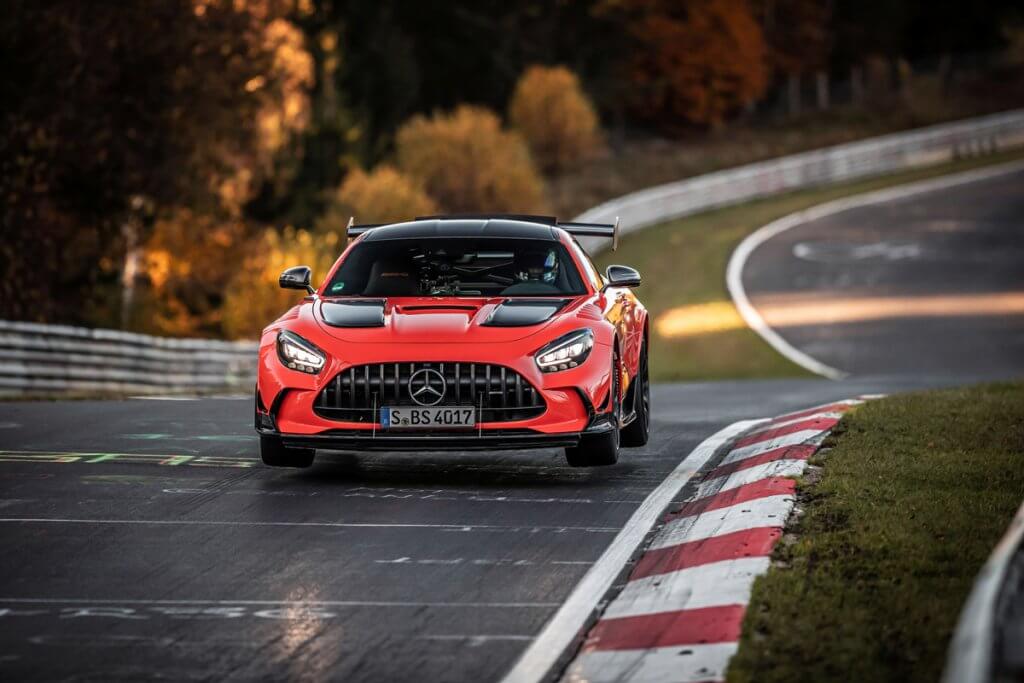 Engel made full use of all the new Mercedes-AMG GT Black Series. The car features the most powerful AMG V8 series engine ever, with 730 bhp, sophisticated aerodynamics and extensive suspension adjustment options. To prepare for the epic run, the carbon fibre front splitter was extended to the “Race” position, and the lower and upper wing blades of the rear spoiler were each adjusted in the middle position. The adjustable AMG coilover suspension was lowered by five millimetres at the front and three millimetres at the rear to further enhance the venturi effect of the front diffuser. The camber was adjusted to the maximum possible values to the front and rear. In the case of the adjustable anti-roll bars, racing professional Engel opted for the hardest of the three possible settings, and adjusted the nine-stage AMG traction control between positions six and seven – depending on the section of the track. All of these settings and variations are available as standard on the AMG GT Black Series. 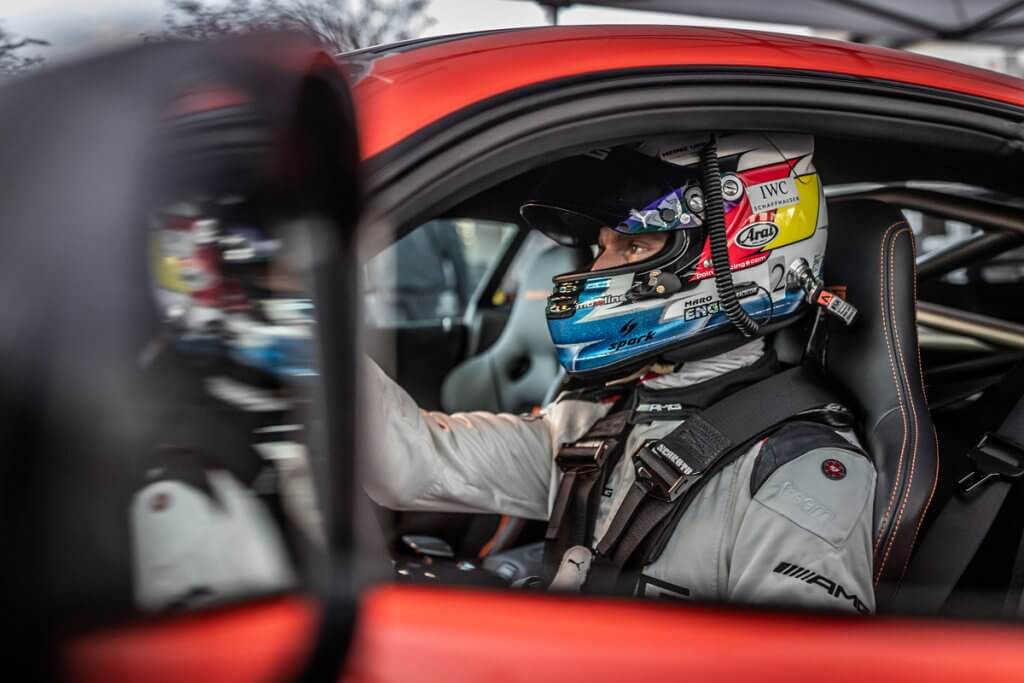 The Michelin Pilot Sport Cup 2 R MO tyres with “soft compound,” are completely standard equipment, and were developed in collaboration especially for the AMG GT. The highest possible level of safety was ensured not only by the ceramic high-performance composite brake system, but also by the Track Package with rollover protection system and four-point safety belts. 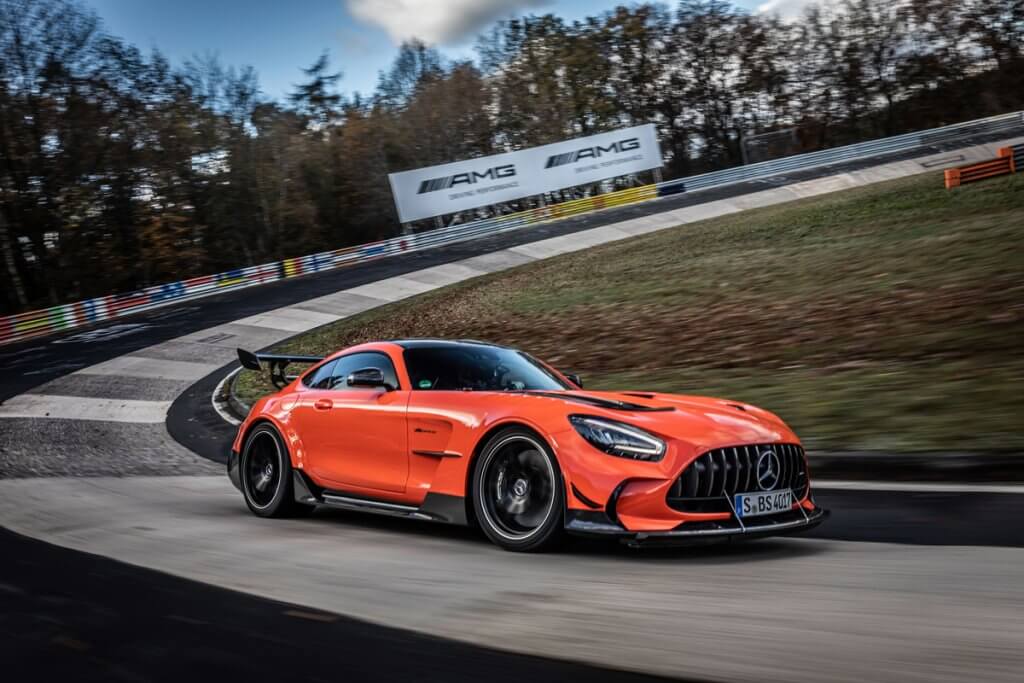 “That was a really impressive ride,” said Maro Engel after completing the record lap. “With speeds of up to almost 270 km/h in the Kesselchen section of the track or well over 300 km/h on the long Döttinger Höhe straight, the car is significantly faster than my GT3 racer. To drive around the circuit in 6:48.047 minutes with a production road car in these track conditions is really awesome. Like my GT3, the AMG GT Black Series offers a lot of adjustment possibilities, all of which enabled me to create a setup that was tailor-made for me.” 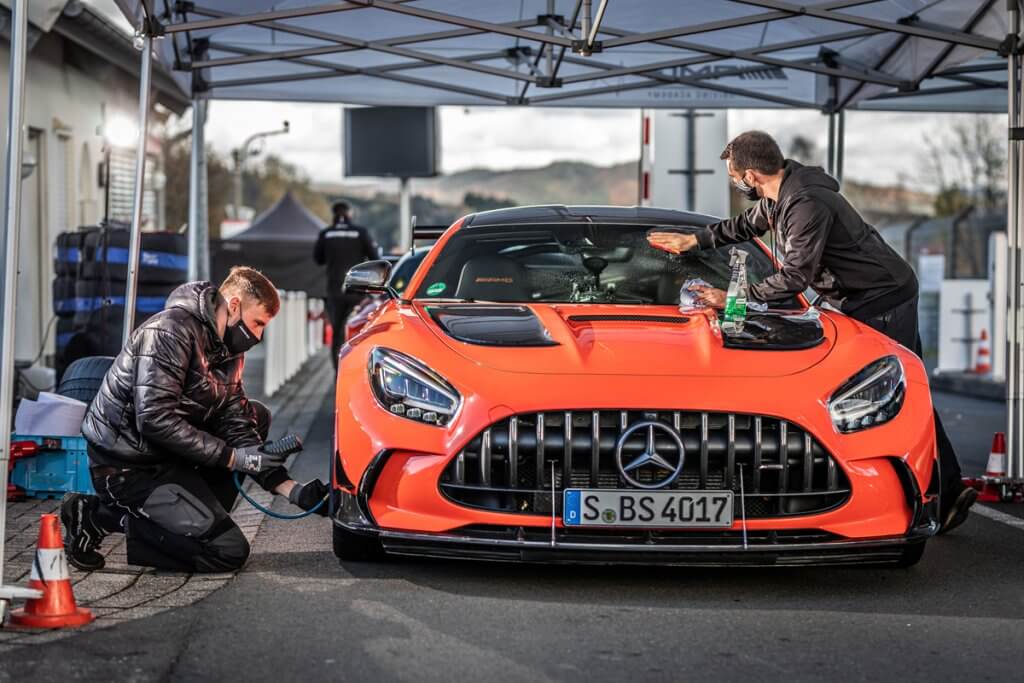 Also in terms of aerodynamic efficiency, the Mercedes-AMG GT Black Series takes a great deal from the race car. A direct derivation from motorsport, is the carbon-fibre hood, with two large exhaust outlets. These guide the warm air out of the engine compartment. This increases overall downforce, as does the sophisticated rear wing concept and the largely enclosed underbody. 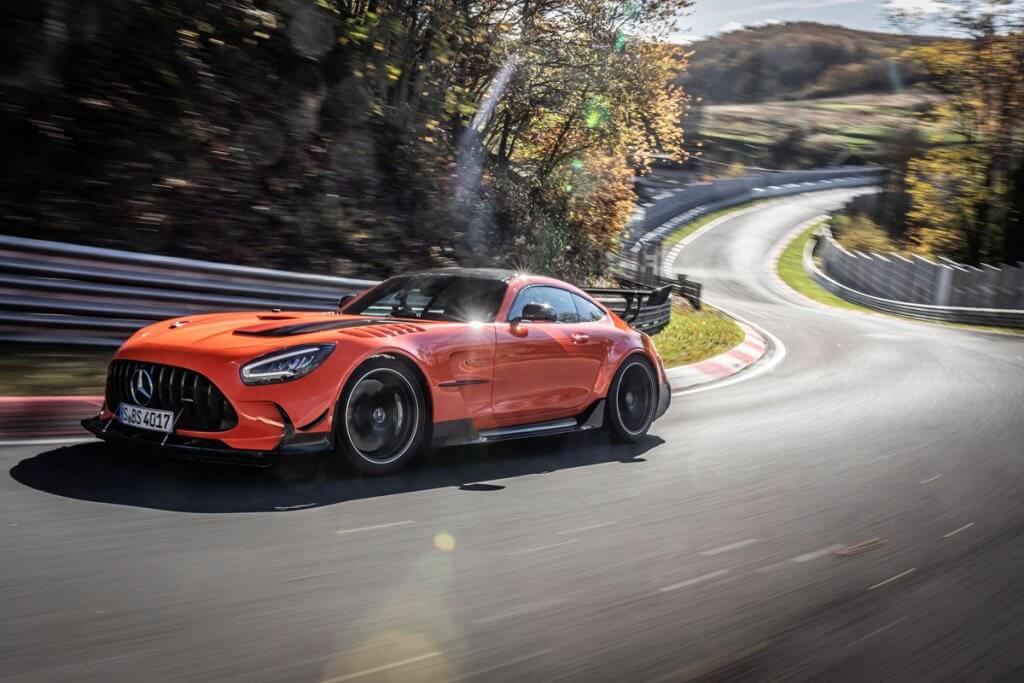 “It’s really impressive how much downforce the Black Series generates and how confident and reliable it can be driven, even at the absolute limit. My hat is off to the developers from Affalterbach for what they have put on wheels here. And I’m very pleased that I was able to demonstrate these fascinating engineering skills with this great lap time,” said Engel.

The conditions were not quite ideal for the run. The track was dimly lit and slightly damp. But regardless, Engel also set the fastest time at an outside temperature of seven degrees C.