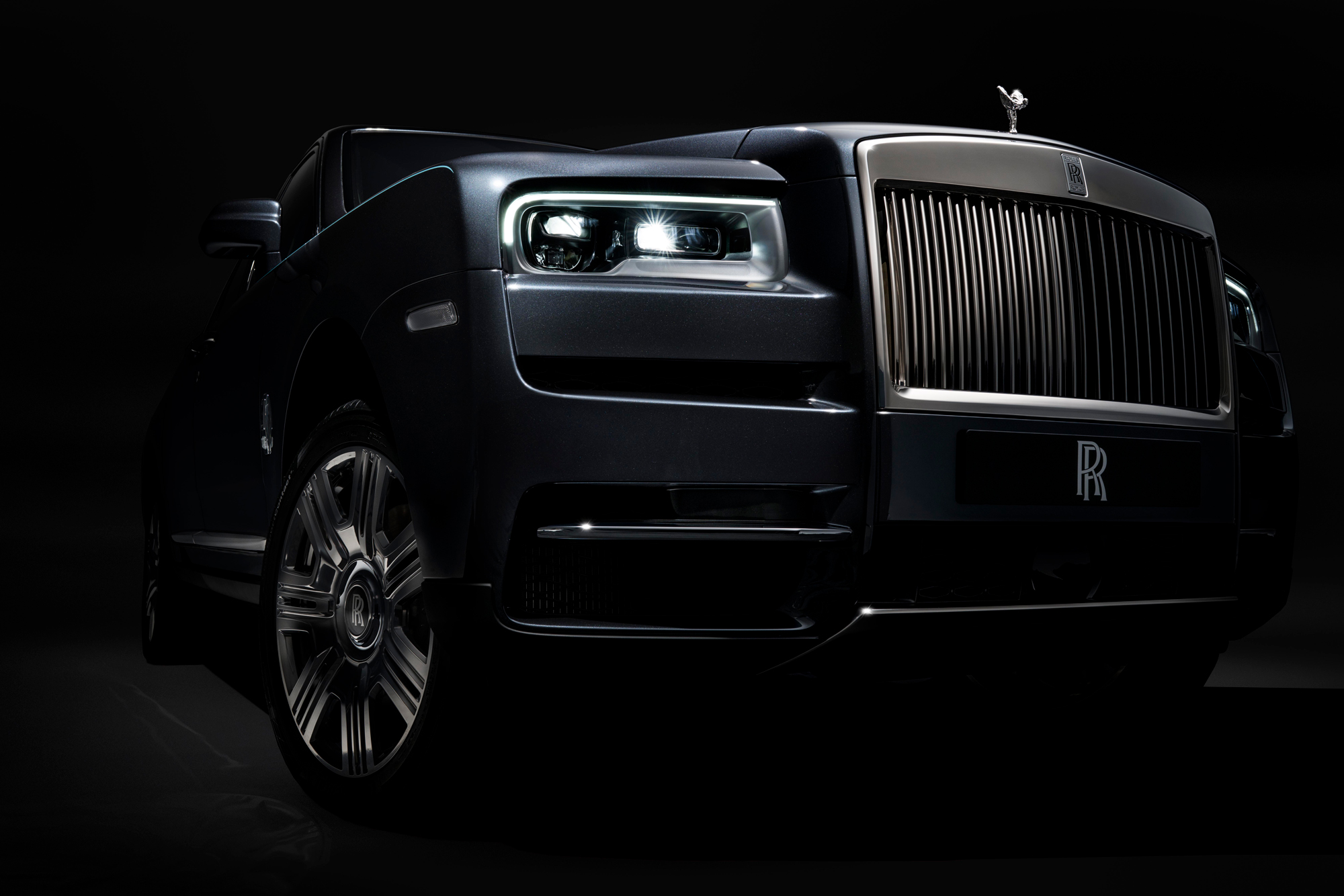 The Executive Magazine takes a look at the brand-new SUV offering from Rolls-Royce: the luxury four-wheel drive Cullinan, due for release in 2019.

With rumours circulating as far back as 2015 about a luxury SUV from Rolls-Royce, we can finally reveal that production has been confirmed for early next year.

This family-orientated addition to the Rolls-Royce fleet is a first for the iconic British brand, featuring four-wheel drive, a raised driving profile, active tailgate and a whole host of new design features. It will be pitched up against the Bentley Bentayga and the more extreme Lamborghini Urus when released to the public in 2019. 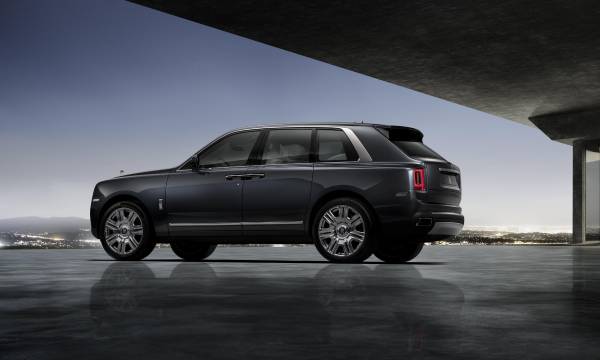 In true Rolls-Royce style, a mantra of ‘effortless, everywhere’ has been adopted to play on the SUV’s all-terrain capabilities, which is engineered to provide an easy and enjoyable experience for the driver – something that any Rolls owner would come to expect.

When we got to see the Cullinan in the flesh for the first time, the most immediately surprising aspect was its size: it’s actually smaller that we were expecting. Only very slightly longer and wider than the Ghost by a few millimetres, and sitting 80mm lower than the Range Rover Vogue LWB, the Cullinan makes up for its diminutive shell with its striking bodywork. It’s bold, shapely and has a strong road presence, resulting from five years of design work, where meticulous and painstaking tweaks and changes were made in order to get the aesthetics just right.

The team was headed up by design chief Giles Taylor (who has since departed from the company), who had a bold vision for the Cullinan from the very beginning. The emphasis was placed on strong lines, big features and bulging bodywork. The functional aesthetics like the oversized grille and tougher-looking headlights are unapologetically big and brash. The heavy styling magnifies the capabilities of this strong yet luxurious crossover. 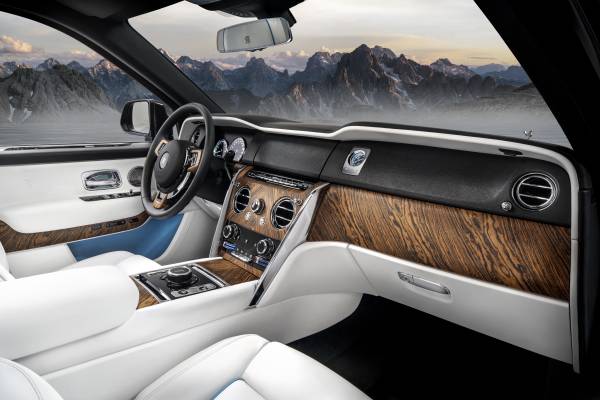 The Rolls-Royce experience of late is a much more personal affair, and the customisation options are pretty much limitless. This is most obvious when owners select their interior options. There is a vast array of the world’s finest leathers, woods and metals to choose from, but if the standard options still aren’t to your liking, a design consultant can help you create your dream interior space.

Passengers are taken care of with a myriad of entertainment in the back, which again can be refined to suit individual needs. Access to the rear seats is gained via typical Rolls-Royce rear-hinged coach doors, opening in a ‘suicide’ fashion and giving a fantastic view of the interior when both doors are opened. A nice touch is the way the doors sit over the body skirts, which prevents the driver and passengers from getting dirty when getting in and out of the vehicle.

The seating array can be customised to suit any Cullinan owner’s requirements, from a folding three-seater bench to fixed sumptuous chairs. You can even opt for a hidden seating platform which pulls out to hang over the tailgate to create a viewing platform. In any configuration the rear seats offer a ‘Pavillion’ view forward, being slightly higher. 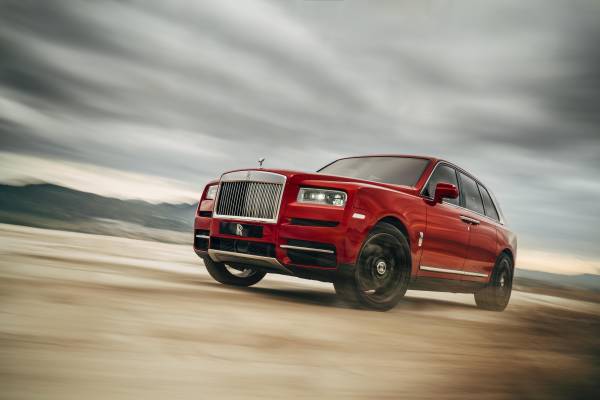 The Cullinan takes somewhat of a new direction when it comes to defining its buyers’ profile. Rolls-Royce has made a huge effort to make this much more of a driver’s car; gone are the days of being wafted around by a chauffeur – enter the new generation of Rolls owners. This is most prevalent in the driver’s seat, where you’re presented with a hugely functional dashboard layout and an array of driver aids such as night vision with pedestrian and wildlife detection, adaptive cruise control, and lane departure warning systems.

An adapted version of BMW’s highly acclaimed iDrive infotainment system controls the vehicle settings, in-car entertainment, sat-nav and driver aids, all from an intuitive and simple-to-use interface that doesn’t distract the driver.

Other gadgets include the ‘Everywhere’ button, which adjusts a multitude of different settings to soften the suspension even further to make light work of those pesky potholes and rugged terrain. Some of the most futuristic tech that we’ve ever encountered in a car feature in the Cullinan, including a stereo camera in the windscreen which monitors the road surface and adjusts the suspension accordingly, and a navigation system that can prepare the gearbox for the road ahead with its three-dimensional mapping. 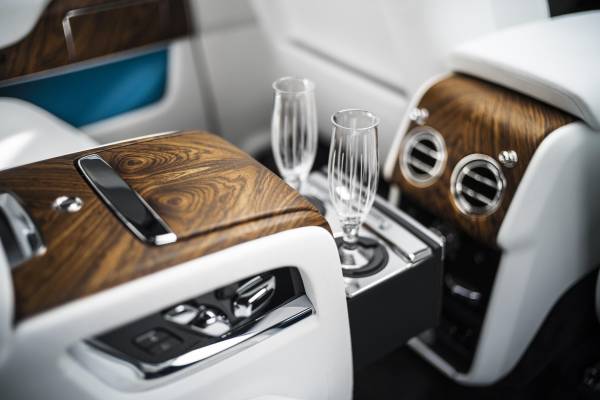 The Cullinan shares the exceptional 6.75-litre twin turbo V12 engine and all-aluminium chassis found in the flagship Phantom model. The power plant has been slightly de-tuned to maximise the comfort and smoothness, rather than pure power – but delivering 850Nm of torque from 1,600rpm with 563bhp still makes it a fast and formidable beast. The top speed is limited to 155mph, and the official 0-60mph figures haven’t been released yet.

The huge engine and bulging bodywork sits on top of the unique chassis, which features a super smooth double-wishbone front axle and five-link rear axle setup with air suspension struts. The air capacity has been increased to deal with the roughest of terrain and to allow the heavy SUV to glide over all manner of surfaces. The air suspension system also drops the car by 40mm to allow easy access. The four-wheel drive system is complemented by an all-new four-wheel steering system, promising to hug the road and make light work of any twisting track or off-road path. 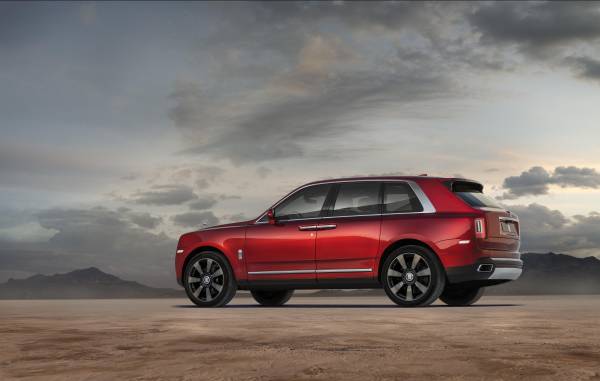 Whether you like it or not, electric vehicles are the next big thing, and the architecture of the chassis has been designed and engineered with full electrification in mind – something we’re seeing more and more of in luxury car brands.

If you’re lucky enough to get your name down for the early-release pre-order shortlist, you can expect to receive the most luxurious SUV on the market early next year. An official release date hasn’t yet been announced, but it will certainly be worth the wait.