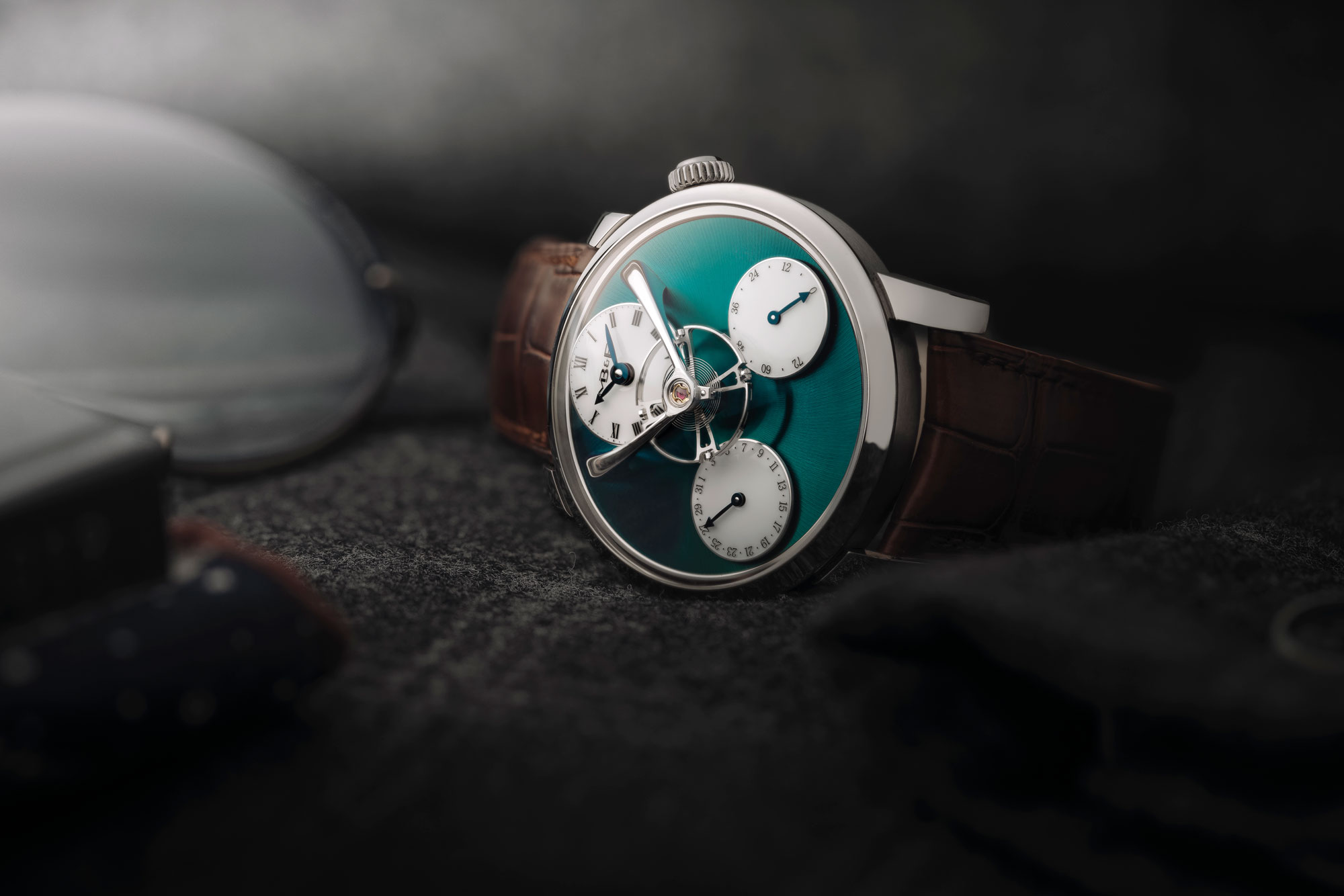 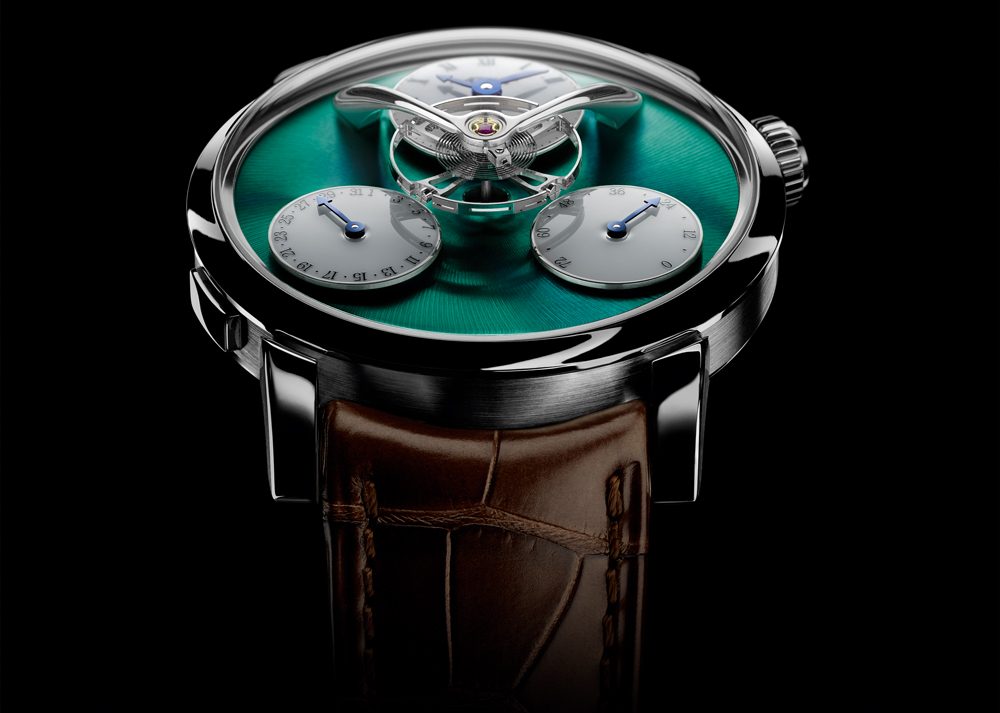 Inside the case is the Split Escapement movement. It’s an unconventional feature, with the regulating system split between the top of the movement – where you can admire the oversized flying balance wheel, revolving on its own – and the back of the movement, where you’ll see the anchor and escapement wheel.

The secret of this unorthodox construction is an extra-long shaft of 12mm that goes right through the movement, connecting the regulating system’s essential components. The suspended balance wheel is positioned above everything else. In Legacy Machine Split Escapement, this feature is not only highlighted, but raised to another level of technical achievement for the watchmaker. 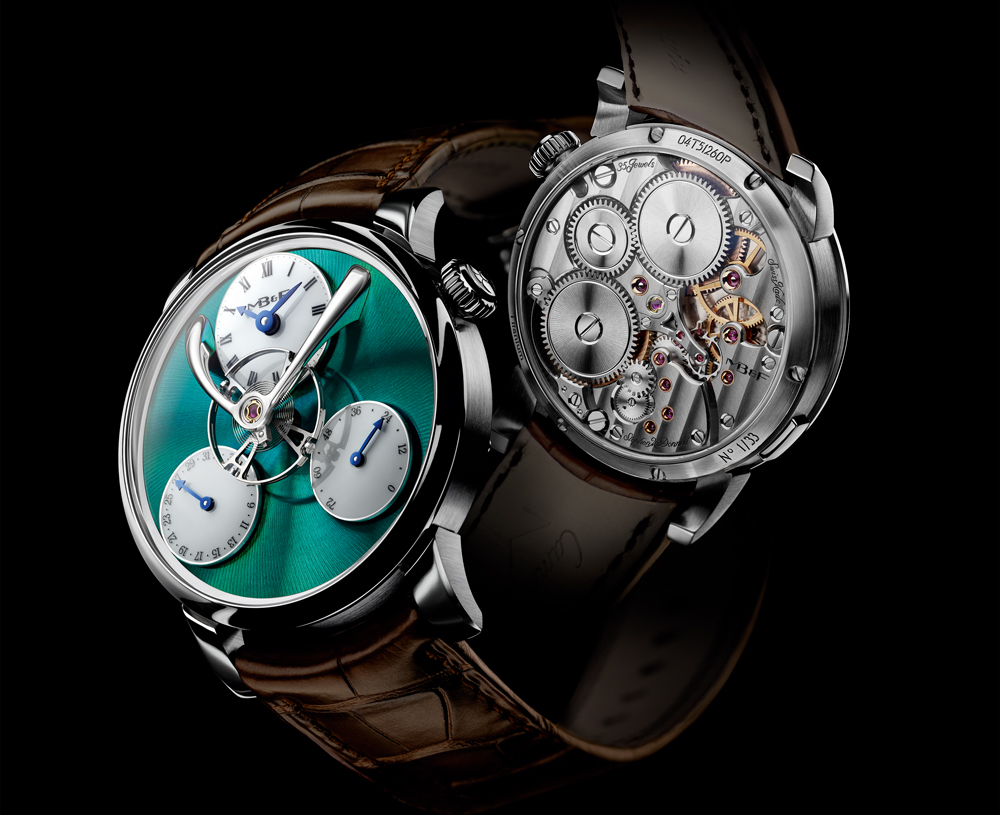 Just below the highest point of the domed dial crystal, the balance of LM SE beats at a sedate, traditional 2.5Hz / 18,000bph. What is rather less traditional is its construction. Unlike most of the other suspended balances in the Legacy Machine collection — indeed, unlike any other balance outside of MB&F — the balance of LM Split Escapement seems to oscillate on its own, without any visible intake of energy. The essential remaining parts of the escapement, which provide the driving impulse – anchor and escape wheel – are concealed on the opposite side of the movement, almost 12 mm below; hence the name ‘Split Escapement’.

Under the balance, the 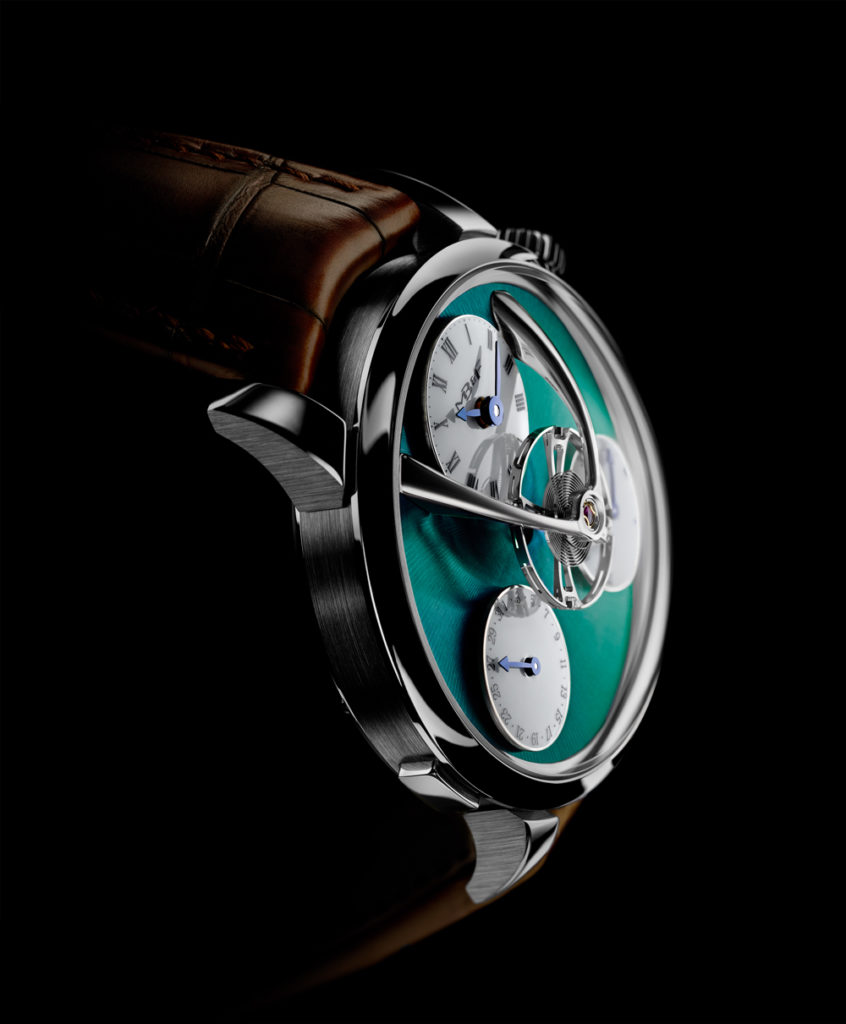 triple-dial design of LM SE gives the time at 12 o’clock, the power reserve indication at 4 o’clock, and the date at 8 o’clock. The date can be quickly and easily adjusted thanks to a push-button on the side of the case, next to the date dial.

Other design features are natural evolutions of those found in previous Legacy Machines, such as the organically arched balance bridge found in the LM Perpetual. The white gold launch editions of LM SE feature the micro-textured “frosted” finish that is closely associated with antique pocket watches of the 18th and 19th century; this traditional technique was presented by MB&F for the first time in the LM 101 ‘Frost’ editions. Antique watches featuring a frosted finish used acid baths to achieve this effect, but modern methods of replicating a frosted finish involves manually burnishing a metal surface with a wire brush. LM Split Escapement is a celebration of this technique, which is executed completely by hand for all 72 pieces of the launch editions.

The sensitivity of the balance and the paramount role that it plays in chronometric precision are usually reason enough for watchmakers to avoid straying too far from convention when it comes to escapements. However, the outstanding horological mind of Stephen McDonnell, the watchmaker behind the award-winning Legacy Machine Perpetual, was able to circumvent the real and perceived hindrances to creating a new configuration of mechanical regulator.